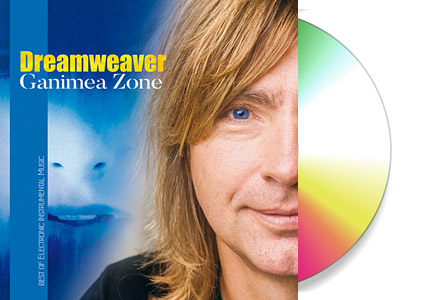 If you are interested in album releases or questions about music by Markus Pitzer send a message to markus@dreamweaver.at!

Markus Pitzer is born on February 18, 1970 in the hospital in Schladming (Styria). He grew up in the hotel of his parents on the high plateau of Ramsau am Dachstein, attended the elementary school in Pichl/Enns and then the secondary school in Schladming. After school, the education as hotel manager follows at the Hotelfachschule in Bad Ischl.

As a child, a small black radio that fascinated him was responsible for making him a musician. He was thrilled with the fact that voices and music could be heard from such a small thing. From then on it was his goal that his music should be heard in Radio's future.

The first musical instrument was an accordion. An instrument that did not inspire him very much. When he got his first keyboard in 1984 he starts to compose songs. While working as a waiter and barman in the years 1988 - 1996, he composed his own songs, saved money to buy more musical instruments, produced an album and sought ways to advance his music.

1989
Recording the song "Paradream" in a recording studio in Vienna during a sound engineering seminar.

1990
Release of the song "Paradream" on a record promotional sampler by "Cactus Records" with the title "Instrumental Images 2". Production of the debut album "Paradreams" at Cactus Records Studio in Vienna.

1991
Release of the debut album "Paradreams" on the record label "Cactus Records". The songs from the album were used both on the radio and on TV.

1992 - 1995
Composition of sounds, SFX and soundtracks to the PC-Game "Anno 1602" - Release in the year 1998 including 5 Songs composed by Markus Pitzer. The game was sold over 2 million copies by January 2002, making it the best-selling game ever made in the German-speaking world. He also worked on instrumental songs for a new album during this time.

1996
Production and release of his 2nd album "Miles Away", an audio CD with mostly faster and more melodic Dreamdance tracks as well as songs in the genres Chillout and New Age.

New Job, company and the way into the internet

1996 - 1998
Move from home to Vienna. Retraining as a multimedia producer at the SAE in Vienna and production of his second album "Miles Away".

1998
Return to Schladming and founding the company "PMmediapoint". Offers from the first idea of a homepage to completion, support and search engine marketing (SEO, SEM).

1999 - 2002
Music platforms in the Internet offer new opportunities to present music worldwide and these opportunities are also used. Since the release of the first tracks in the Internet, Markus Pitzer has been collaborating virtually with artists around the world. First chart successes on music portals like mp3.com and special.com follow. Music genres like "Electronic", "Easy Listening", "World Music", "New Age", "Ambient", "Native American" are followed by number 1 hits.

2002 - 2008
With partners, the company "Ennstal-IT" was founded in August 2002. As Creativ Director, Markus is responsible for concept development, project management, HTML programming, web design and sound design. Music is an important component and is used in projects as background music, still.

2008 - 2009
Changing from the company Ennstal-IT as a web designer at Werbeagentur ALGO.

2009 until today
Training as a mountain guide at Bergwanderführerverband Steiermark and a new job as a marketing assistant and hiking guide at Wander-Vitalhotel Steirerhof in Schladming. As hiking guide, Markus finds in the mountains around the Dachstein and the Schladminger Tauern new life energy and inspiration for new song compositions.

2012
Composition of Filmmusik film music for the independent western movie "Und sie kehrten niemals wieder" by "Brandl Pictures" and UMOS Productions, which was released in 2013.

2013
Production and release of the album "Best of Dreamweaver". The album is a 4-disc CD box that offers a total of 70 instrumental songs that were composed from 1997 to 2013.

2015 und 2016
Production and release of the album "Lifepoints". The music of this double album offers a great mix of calm, rhythmic but also meditative instrumental songs. Relax and enjoy a total of 24 songs.

2016
Production and release of Music-Pack "ELECTRONICA I". The music of this MP3 album offers holiday mood and a great mix of chillout, rhythmic instrumental songs and should bring people into a positive mood.

2017 und 2018
Produktion und Veröffentlichung des Albums "Ganimea Zone". Welcome to the Ganimea Zone! Where one world goes into the other and things change. You break up, the old remains behind you, new territory is emerging. With "Ganimea Zone" Markus turns a bit on the pace screw and offers on the album in addition to chillout songs also slightly faster Electronica tracks.

On YouTube you will find a lot of videos with background music composed by Markus the Dreamweaver. Visit my YouTube channel!

This video offers 58 minutes instrumental music to enjoy and relax. 11 songs ranging from rhythmic electronica music to chillout and lounge. Most of the songs are on the "Best of Dreamweaver" album.

Peaceful sleep music for adults and children. Music to dream and relax. Pleasant relaxation music to fall asleep, relax and dream. Use my music for meditation, yoga, spa, massage or as background music for your projects.

I would appreciate it if you like my music and use it as background music in your projects, videos or websites, or just enjoy my instrumental music. Continue!